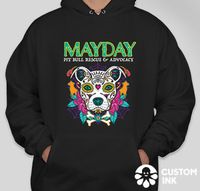 This is a FREE & DOG FRIENDLY Halloween and Day of the Dead themed party where costumes are encouraged!

• Birthday Treats for dogs and humans from Luna and Lily

Mayday will be at the annual street fair with lots of merch and info to share about volunteering and fostering! This one-day event spans over a half mile in the heart of Phoenix’s Melrose District on 7th Avenue from Indian School to Camelback Road.

This event is FREE to attend and includes:

LOCAL VENDORS - Over 200 booths of local artists, indie crafts, and other amazing products!

FOOD TRUCKS - A variety of the best eats in the valley

EVERY DOG HAS HIS DAY IN GLENDALE! 10th ANNUAL DOG DAYS OF GLENDALE CELEBRATES A DECADE OF DOGS

Mayday will be there with some of our adoptable dogs, lots of merch and info about fostering and volunteering for Mayday! Dog Days of Glendale 2020 will transform downtown Glendale’s Murphy Park into a playground for dogs and their people. Pet owners and their furry friends will enjoy OVER 45 pet related vendors, pet blessings, pet adoptions, FREE Doga (dog yoga) classes, Bark Buster's Interactive Fun Zone, Glendale P.D. K-9 training demonstration, pet food sampling, frozen doggie treats and so much more.

The Dog Days of Glendale event includes a donation drive for pet food and supplies to benefit the Animals & Humans in Disaster-Empty Bowl Pet Food Pantry. Visit www.emptybowlpetfoodpantry.org for a wish list of items needed.

Admission and parking are free. Event attendees are encouraged to start at the Portable Information Booth located in Murphy Park to pick up a list of the day’s activities.

We guess our friend and volunteer Chuck did a few impressive things before joining Mayday...like producing Bram Stoker's Dracula! He'll be doing a Q&A at this event and he's invited us along to share Mayday info. Come out and say Hi!

COPPOLA’S WILD, BLOODY TAKE ON EVERYONE’S FAVORITE VAMPIRE Featuring one of the film's producers, Charles Mulvehill, live and in-person! He will partake in a Q&A with the audience following the film.

For our Bad Romance series, we’re exploring some of our favorite twisted love stories. See what else we have in store for you here.

You’ve got yourself Gary Oldman in extravagant makeup. You’ve got Anthony Hopkins chewing up scene after scene. You’ve got Tom Waits eating bugs. You’ve got blood shooting out of Keanu Reeves’ nipples. What more do you want?!

If you’ve never seen THE GODFATHER director Francis Ford Coppola’s off-the-wall adaptation of BRAM STOKER’S DRACULA, now is the time. With an incredible cast, including forever it girl Winona Ryder, and some still-mind-blowing practical effects, this R-rated take on the infamously seductive nightwalker is an audacious experience that’ll get your blood pumping. Just don’t let Dracula get a whiff of it.

Valentine's Day Brunch with your Lovebug

Join us for a Valentine's Day Brunch for your and your Lovebug!

Mayday will provide a brunch buffet for all the pups. There will be a raffle, goody bags and some other fun activities in the works, including a birthday celebration for Nezzie Oscar Double Snoot!

The cost is $10 per pup. Register now by clicking on the button below. Registration for pups is limited to 35.

Food for the humans will be available for purchase and provided by Edelweiss Biergarten. Menu - https://edelweissphoenix.com/lunch-dinner